“The growing disparity of income in today’s world is a concern to me. I really think that a place like Moorelands is more important than ever. Kids who, through no fault of their own, find themselves in an unhappy or unhealthy place because of family poverty – it just doesn’t seem fair or Christian to me. None of that is their responsibility – it’s OUR responsibility as a community to help lift them over those hurdles.”

Former Board President, Marilyn Pattison, is a Century Club Member who has been donating to Moorelands Kids since the mid-1980s. Recently, we had the pleasure of chatting with her virtually from her home in B.C. and learned a great deal about the history of her involvement with Moorelands Kids.

Marilyn and her late husband, William, first heard of Moorelands when they owned a cottage on Lake of Bays.  “In the mid-80s sometime I decided I wanted to take up sailing,” Marilyn explains, “and to my surprise, my husband bought me a small sailing boat… unfortunately I wasn’t very good at it! So it sat somewhat unused until we looked for somewhere to donate it and that’s when we discovered Moorelands Camp nearby on Kawagama Lake.”

At the time, Marilyn was completing her PhD at the University of Toronto in Higher Education and working on contract at the Ministry of Colleges and Universities. Moorelands’ (or the DCA as it was then known) mission, resonated with her for many reasons. Marilyn herself had gone to camp as a child and grew up on a farm just south of Vancouver. She knew, first hand, the value of being in nature as a child.

“When I learned about Moorelands, it was an instant connection for me. I treasured my own camp experience: getting away and being with other kids and the all the swimming – it was glorious! For me, camp was just a wonderful physical and spiritual experience.”

Getting Involved and Giving Back

After that first donation, Marilyn picked up the phone to the DCA and told them she want to be actively involved and give back.  Several important changes happened at Moorelands during Marilyn’s time on the Board. Firstly, after participating in a strategic planning workshop, a critical insight came to Marilyn and her fellow volunteer board members: they were not truly maximizing their investment in the campers.

“We realised, we put a lot of work, energy, investment into supporting kids for two weeks… and then we lost touch with them for the other 50 weeks of the year.”

Out of this learning and realization, came Moorelands’ first after-school programming in the late 90s. A huge change in strategic direction for the organization of which Marilyn is very proud.

The other significant change came after Marilyn was asked to consider taking on the role of Board President. At the time, the DCA was experiencing some financial challenges that put the future of the organization in jeopardy. Fortuitously, it was around this time that Marilyn was introduced by her husband to Christopher Barltrop, a senior partner in a top accounting firm in Toronto. The pair soon discovered they were both supporters of Moorelands.

“We knew there would be a difficult road ahead in terms of financial management for the organization and so we came to a kind of pact. I would be president if Chris would take on being VP of finance.”

As we talk, Marilyn is full of admiration as she describes how Chris, who sadly passed away last year, introduced some strong new financial processes that helped ensure the stability of the organization.

Marilyn’s support for the organization has continued over the years and she is very happy to see that the after-school programs are thriving.

“I’m really delighted to see how advanced Moorelands has become in terms of their year-round programming. As much as I support the camp and understand why it’s so important to give fresh air to these kids living in the city during the summer, I believe that if you want to make permanent change in somebody’s life, you must keep that support and contact going.”

Today, Moorelands Kids is proud to be offering just that support to our campers with our after-school programs, Christmas Sharing program, and online meet-ups for kids outside of the geographic area where our BLAST, LED and VITAL programs operate.

“Whatever professional life I’ve had has been devoted to the belief that early intervention and early education – and constant support through that time – make a significant positive difference in somebody’s life.

“What’s really important to me as a donor is that the support continues year-round. For me, the number one value of Moorelands’ programs would be the enhancement of a sense of self worth and, that it brings hope. Hope for a better future and the tools to be successful in that future.

“Because we know that the people who are successful, not only are able they able to do math and science and technology, but they need those strong, effective human relations skills. And that’s what kids are able to develop through the camp and after-school programming…

“To take a child at a critical age and give them those supports that they need to develop into healthy human beings – you know, I don’t think there’s any more important place to put your time and your effort.”

Thank you, Marilyn, for your leadership and enduring support over more than 34 years! And thank you to everyone in our community who keeps the learning and growth going for our kids year-long!

Are you a former Board Member, CC Club Member or Moorelands’ Alum who would like to share your story? Please contact Helen Gaan at hgaan@moorelands.ca, call her at (416) 466-9987 ext.312 or fill out the form below!

YOU CAN SUPPORT YOUTH YEAR-ROUND!

Please make a donation to equip
marginalized kids with the tools they need for school success.

Latest from The Hub

6 Ways to Get Your Team to Pull Together

Why After-School Programs Are So Important

How Parents Can Help Their Kids Be Leaders 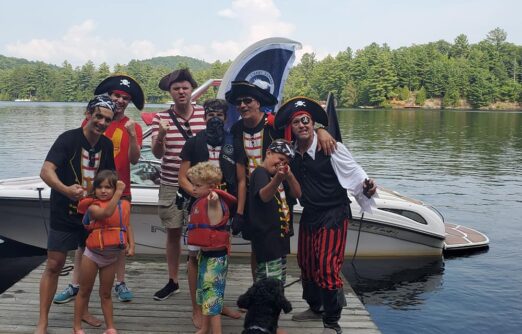